Michigan aggravated assault lawyer Paul J. Tafelski releases a new article (https://www.michigandefenselaw.com/aggravated-assault-lawyer/) explaining the legal aspects of assault in Michigan. The lawyer mentions that aggravated assault can rise to the level of a felony under state laws. Being charged and convicted of such a crime can have a long-term impact on a person’s life.

According to the Michigan aggravated assault lawyer, “Aggravated assault or felonious assault is defined by Michigan law as “an unlawful attack by one individual upon another wherein the offender uses a weapon to inflict injury or displays it in a threatening manner.” An aggravated assault is something where “the victim suffers obvious severe or aggravated bodily injury involving apparent broken bones, loss of teeth, possible internal injury, severe laceration or loss of consciousness.” 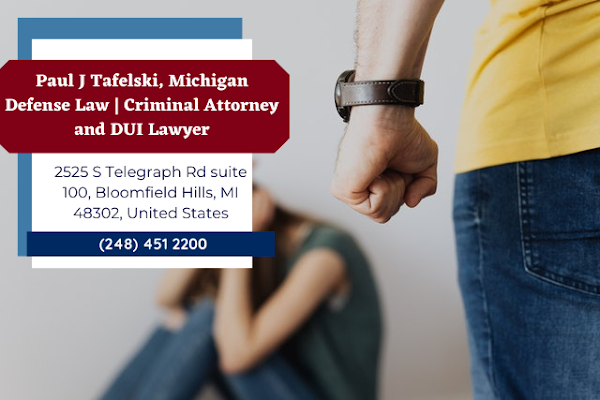 The use of a weapon in an aggravated assault can increase the charge to a felony. Attorney Tafelski clarifies that under the Michigan Penal Code, guns, knives, brass knuckles, and other such dangerous weapons can increase the charges. However, even without a weapon, an individual can still be charged with felonious aggravated assault if the victim suffers a serious injury.

Charges of assault in Michigan can vary from a misdemeanor to a felony based on different factors. Some of these factors include the presence of a weapon, the extent of injury sustained by the victim, the intent of the accused, and the criminal history of the defendant, among others. Under the Michigan Penal Code’s definition of felonious assault as having been committed with a dangerous weapon, the defendant’s legal defense may hinge on what constitutes a dangerous weapon. The debate around such factors can make the case proceedings complicated, according to the attorney.

“If convicted of felonious assault or aggravated assault with a dangerous weapon, you could be sentenced to up to four years in prison and/or a fine of up to $2,000. If the assault took place in a “weapon-free school zone,” then you face imprisonment for not more than four years, a fine of up to $6,000, and up to 150 hours of community service. If your case is ultimately reduced to a misdemeanor assault, the potential penalties are significantly less serious. Basic assault carries with it a potential penalty of not more than 93 days in jail and/or a fine of not more than $500,” attorney Tafelski further emphasized.

The criminal defense attorney enumerates some points that must be clarified should an individual receive an aggravated assault charge but the attorney also clarifies that a felonious assault charge can be reduced in some cases. This occurs in a negotiation with the prosecution. This situation can apply if the prosecutor recognizes the difficulty prevailing during trial on the felony charge.

Lastly, attorney Tafelski emphasizes that defendants have legal rights that must also be protected. Consulting with an experienced criminal defense lawyer is important in constructing a skilled legal defense and making sure the defendant’s rights are upheld.