Michigan drug crime lawyer Paul Tafelski releases a new article (https://www.michigandefenselaw.com/drug-crimes-lawyer/) explaining the possession, sale, and distribution of drugs in Michigan. The lawyer mentions that in Michigan, an individual may be convicted of possession with intent to deliver if they are caught with even just one marijuana cigarette that they aim to share with friends. Even if the person has no intent to make a monetary profit, or even if they were just doing somebody else a favor, they may still be convicted of delivery.

“In Michigan, a possession is typically charged in a situation where there is no evidence or the evidence suggests that the drugs are just being possessed with the intent that it’s for your personal use. Possession is basically defined as whether or not you have dominion and control over those drugs,” says the Michigan drug crime lawyer. 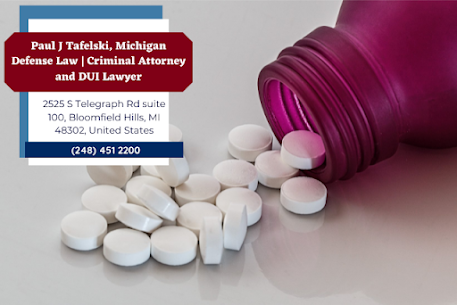 The lawyer explains that the intent to deliver only requires the police to be able to prove that the drugs are not just for the individual who was caught but for someone else. It is very important for an individual to know what to tell the police instead of accidentally admitting to a more serious charge of delivery.

Attorney Paul Tafelski adds that sometimes, people get forced by the police to cooperate to dodge a more serious charge. However, people also unintentionally admit to an intent to deliver even though they are not drug dealers. For those who use medical marijuana, Michigan has a Medical Marijuana Act in place that defines how a person can transport the drug as well as where and when they can use it.

In the article, attorney Tafelski adds that penalties for the different types of charges related to possession, sale, or distribution of drugs can range from a 93-days misdemeanor to a 5-year felony. A person’s prior record can also significantly affect the amount of time they are going to serve.

According to the criminal defense attorney, “What really determines how long a person gets incarcerated for is a combination of those Michigan sentencing guidelines which are now advisory. Also, the prior record and the facts and circumstances of that case; does it appear to the judge that the person is involved in the drug world as a business; does it appear that this is an isolated incident; does it appear that’s an ongoing pattern, these are all sorts of different elements that can affect the outcome of the case.”

Lastly, attorney Paul Tafelski emphasizes the importance of having a skilled lawyer when facing charges of drug possession in Michigan. Having an experienced attorney may be able to help the defendant understand their rights and protect their freedom.